From Homeless, Single Mom to Software Engineer: The Story of Brittney Ball

When Brittney Ball was pregnant and homeless in Washington DC, she never imagined she would be a successful software engineer, public speaker, and mentor just six short years later. But with hard work and determination, she has proven that your past doesn’t have to define your future.

When Brittney found out she was expecting, she knew she had to get off the streets. The Salvation Army Turning Point Center opened their doors to provide transitional housing for Brittney and later her son, Liam. While there, she enrolled in Year Up, a one-year career development program that provides college-level coursework, career training, and a six-month corporate internship to young adults in need. This would be the ticket to a better life for her and Liam.

Over the next year, Brittney completed IT courses and landed an internship with Food & Water Watch as a Junior Developer. She loved the role and spent her nights and weekends at the library teaching herself WordPress, HTML/CSS, and PHP. Everything seemed to be falling into place — until she found out she was expecting her second child and was placed on bedrest due to pregnancy complications.

Without a way to keep up with her job, Brittney was forced to give notice. “I definitely went through a depression,” she says. “I was coming from homelessness and had finally gotten this job. But then I had to give it up!” Disappointed but not defeated, Brittney did what she had to do to stay healthy for her family. She welcomed another little boy named Sebastian in 2015.

As Sebastian entered toddlerhood, Brittney couldn’t wait to get her career back on track. She started taking on contract work for non-profit organizations, who recognized her skills and drive. Brittney held out hope that one of her contract projects would lead to a full-time role, but she was discouraged to get the same answer every time. “They all said they couldn’t hire me because I didn’t have a college degree,” she explains. Another bump in the road — but not a dead end.

Brittney decided it was time to take things into her own hands. She gathered all the money she had, packed up her boys, and moved to Charlotte. No home waiting to welcome them, no job lined up, but all the determination in the world to make a new life for her family.

Unsure where to start, Brittney reached out to a few local developers on LinkedIn, who referred her to the Charlotte Devs Meetup. That’s where she connected with Josh Miller from Skookum, who offered her a contract role as a Front End Developer. “It may have only been a six-week contract, but I needed it! I was determined to prove myself,” Brittney says. Six weeks turned into six months, which turned into a full-time role as a Software Engineer!

Since joining Skookum, Brittney has made it her mission to pave the way for other people trying to create a better future. Every Thursday, she hosts the Charlotte Devs Javascript Study Group to help developers solve challenges and sharpen their skills, while giving back to the group that changed her career. She also organizes events for Girl Develop It to mentor other women in tech and participates in charity drives for various causes, including a coat and blanket drive for the Salvation Army, the organization that supported her most when she needed it.

“I don’t want to forget where I started,” Brittney explains. “I want to give back to the community and help people see that you don’t have to go the traditional route to be successful. If you’re in a bad situation, it doesn’t have to define you. As long as you want it, you can achieve it.”

As her now infamous tweet says, Brittney has transformed her life from a statistic to a success story. And she’s just getting started! 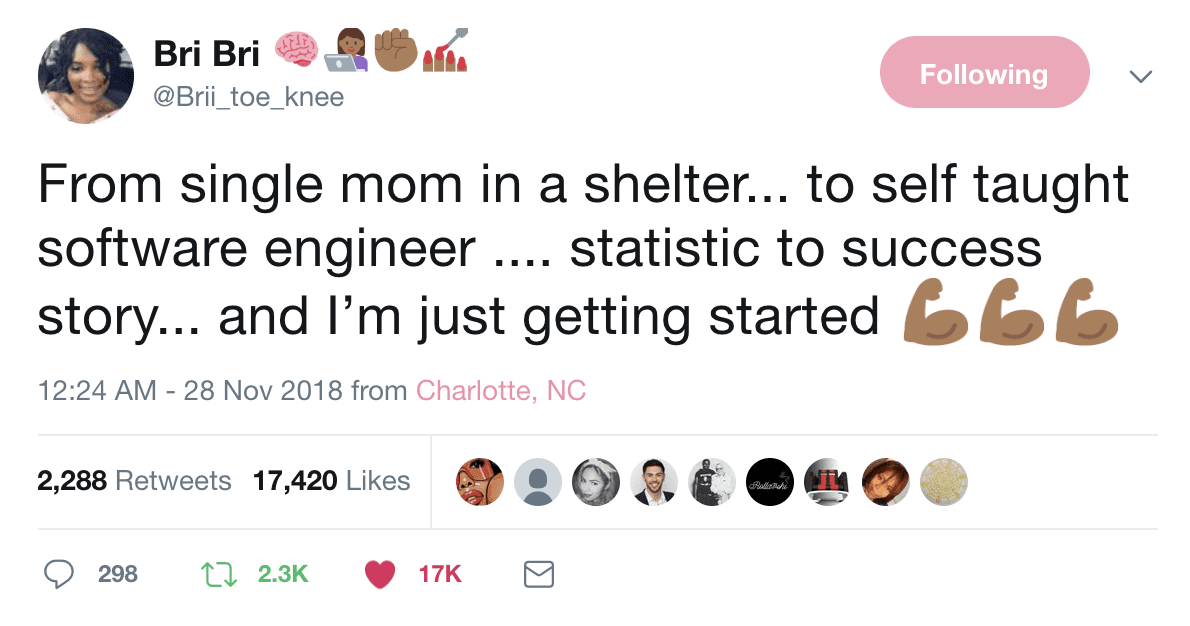 Thanks for reaching out!

We received your message and will be in touch shortly.